Opened last Saturday in Piazza Malpighi O Fiore Mio - Pizze di Strada, a new pizza restaurant that will be a great Christmas gift for all the foodies in town.
​
After Faenza and Milano Marittima, this is the third place to discover O Fiore Mio wonderful pizza. The style is quite similar to Berberé (one of the best pizza in Bologna in my opinion), so long fermentations (from 24 to 48 hours), extraordinary Italian and seasonal ingrediendts and Slow Food Presidi like Pomodoro San Marzano or Brisighella extra virgin olive oil.

​But this time, instead of sitting, wait for the waiter and spend a full dinner tasting different pizzas, here the concept is to have pizza in a fast way, like a street food while you wait for the bus in the square upfront or during weekdays lunch break. 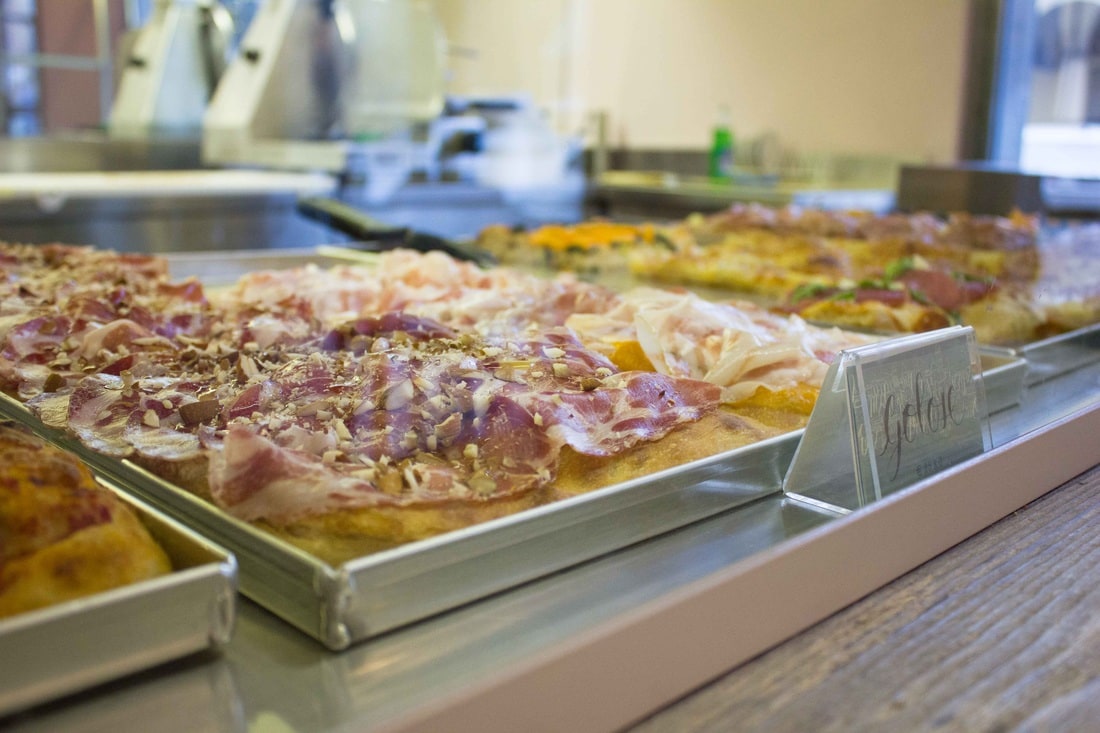 Pizze Golose: this one with Gorgonzola cheese, coppa, almonds and chestnut's honey

How is the Pizza

O Fiore Mio pizza is roman style, also called pizza in teglia, served in square shape like the most famous Altero, but with the difference that this time you won't have problems to digest it: the dough in fact is soft inside but well cooked.

I went there last Sunday to take these few pictures and try the pizza to check if was astonishing as the one I had one year ago in their main restaurant in Faenza. I tried the Seasonal pizza with roman broccoli and coppa di testa and it was just perfect. The combination of rich flavours of the coppa matched perfectly with the sweetness of this typical italian broccolo. 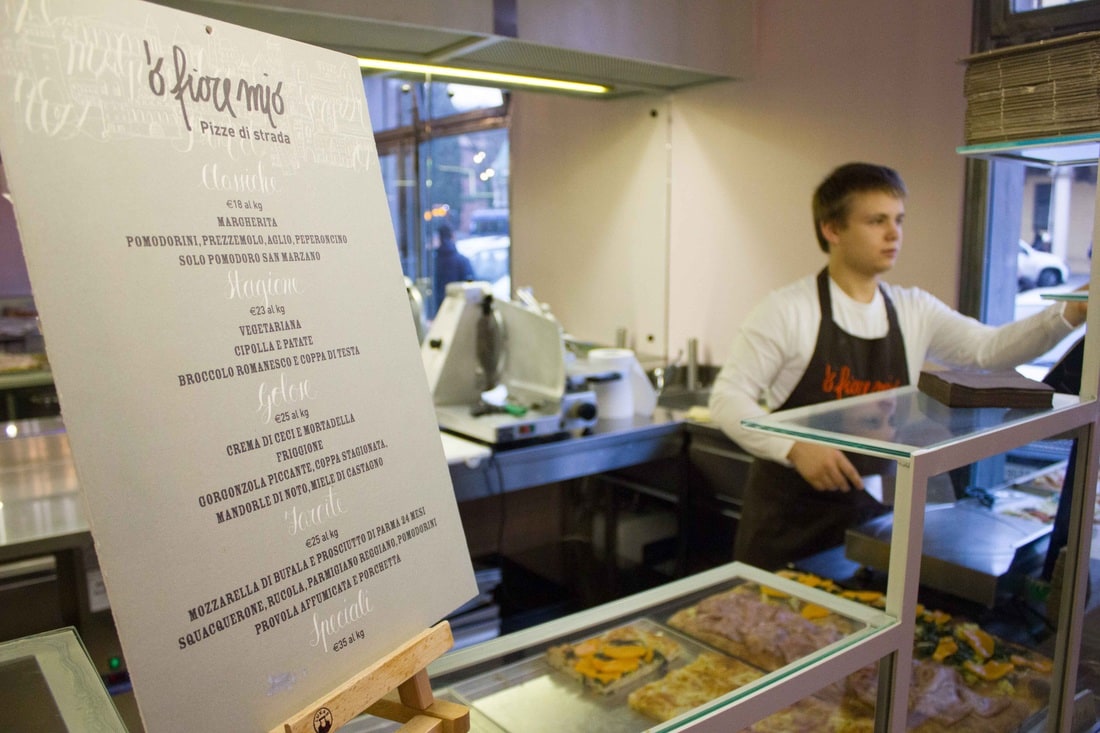 The Pizza Menu that changes seasonaly 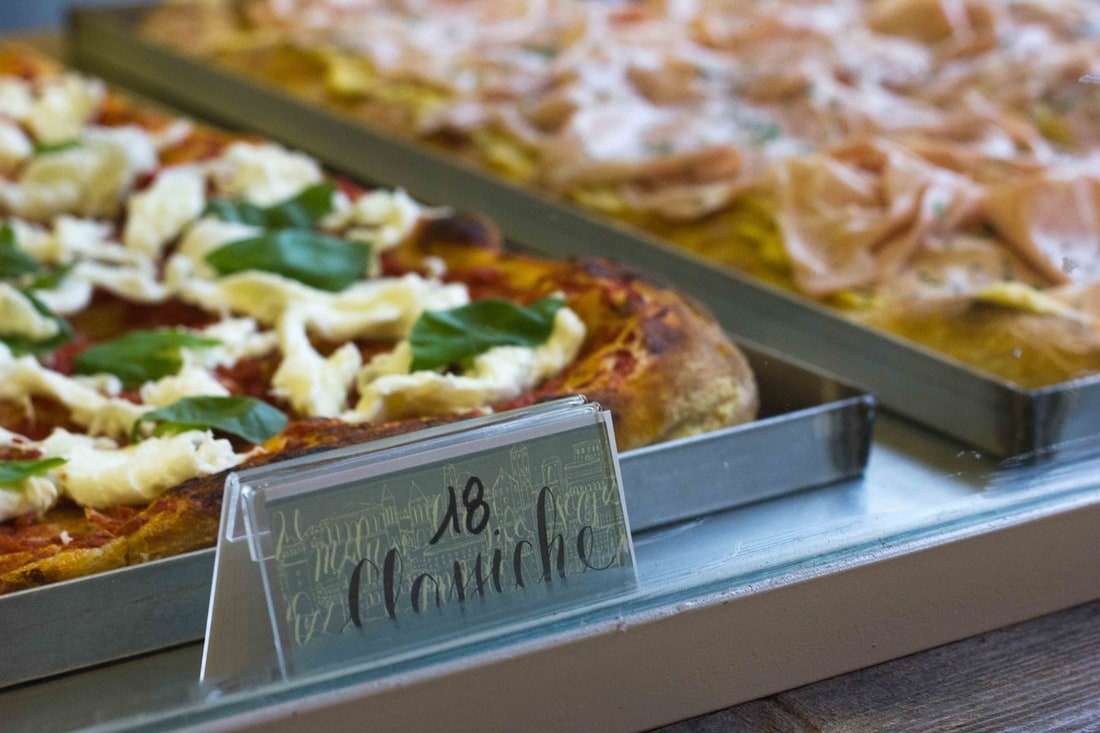 Nice surprises also on the drinks side.
​
Start with Bologna's beer Ronzani, also called Oro del Reno from the name of the river that crosses the city, or choose a craft beer from Birrificio La Mata.

But you can also find Chinotto Neri, one of the best chinotto (a bitter soda obtained from a typical Italian citrus tree).
As a small selection of local wines completes the offer. 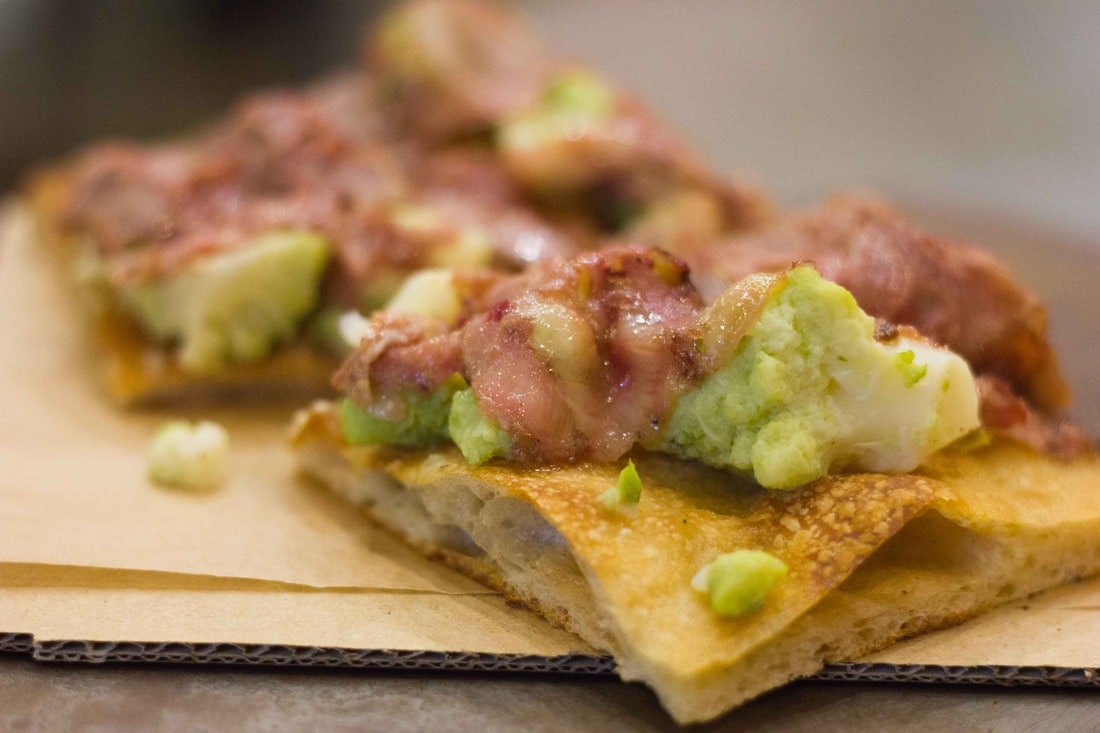 How much does it cost

Like the master of street pizza Pizzazium by Gabriele Bonci (which I visited twice this summer in Rome), prices are per kilos and depends on toppings: The size of the pizza you'd like to have is up to you: the waiter cuts it with scissors and warms it a bit in the oven.

Why eat at O Fiore Mio

The place is nice and quite cozy. 10 tables inside with a space to eat outside during summer. A few products on the shelves and pending light bulbs.

But the strength of O Fiore Mio is not the aesthetics: don't get fooled by the fact that this new trend of gourmet pizza seems just a marketing strategy. I think that places like this or Berberè grow up not because is trendy to spend 2 more € on a slice of pizza, but because the request of quality and attention on what we eat is growing.