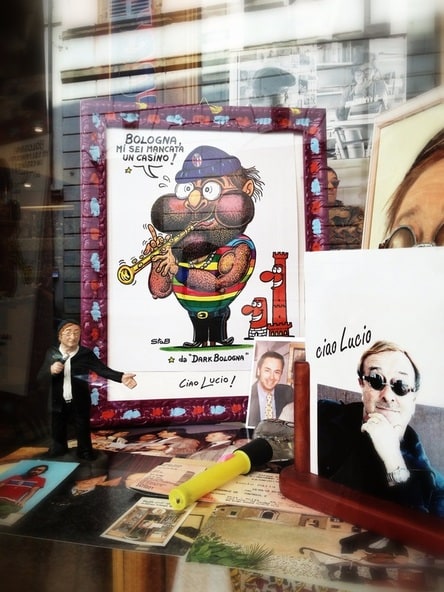 Caffe dell'Accademia showcase
It's really hard to explain what Lucio Dalla represents for Bologna's people. The aim of this blog is to give some little tastings of Bologna to travellers who come here maybe just for a week-end and try to make them feel the real essence of the town.
That's why the first post on this blog has to be about Lucio. Because that's what Lucio did in all his career: with his songs he describes and exports everywhere that essence.
The easiest way i have to describe Lucio to not Bologna's people is about places. His places. In most of his songs Dalla talked about his city (in one song, he also recorded the tolling of Piazza Maggiore clock!) so we can say that Bologna was the most ispiring subject for him. So if you walk under the portici you can meet some of that places.
For example If you visit Caffe dell'Accademia, a bar in Via Guerrazzi next to the wonderful Santa Maria dei Servi church, for a coffee at 9 a.m. you'll see a showcase full of Lucio's memorabilia: LP's, old pictures, statues etc. . That's the bar where Lucio came in the early 90's to have a coffee while recording at his studio in Via dei Coltelli. While you're sitting at the table drinking your cappuccino, you should ask Maurizio, the bartender, to tell you some memories about him. 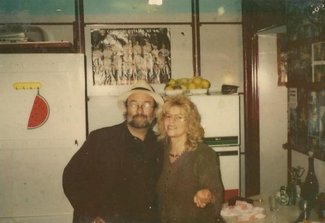 Lucio with Agnese, the owner
If you walk to Piazza Trento e Trieste, inside a small park you'll find Agnese delle Cocomere. That's where a lot of generations of Bologna's people usually come in summer to take a little breath from the hot of the center and have a slice of refreshing watermelon (cocomero).

The stand that you can see now is not the original one that was born in 1971: at that time the slices came out of the window of a trailer that was dismantled every night. Now the local is modern, (you can drink cocktails, eat a piadina or have an aperitivo) and maybe not attended by all the famous musicians that came here in the past, but this venue will always be one of Bologna's traditional landmark.

Here you can listen to Lucio Dalla's song dedicated to Agnese (from 'Luna Matana' LP, 2001).

Stay in touch with monthly news and get my PDF guide with the best restaurants in Bologna, Modena and Parma