Panificio Atti, photo by Giulio di Meo
“Di Bottega in Bottega – travel inside the hearth of Bologna” is a photo exposition created by Giulio di Meo, an independent photographer committed to social reportage, about the old food shops (botteghe) of Bologna.

The exhibition, created in collaboration with IT.A.CÀ festival, presents a selection of shots that capture gestures, environments , people and traditions in these places of tradition, offering the viewer an unusual point of view.

The old shops, craftsmen's workshops and new organic and design shops have been the subject of this investigation conducted in the historical areas of the Quadrilatero and the Jewish Ghetto. 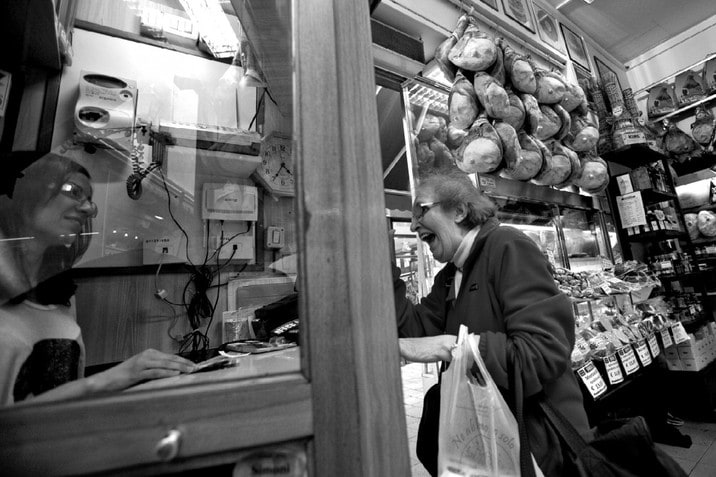 Salumeria Simoni, photo by Giulio di Meo
The Quadrilatero is the area of ancient tradition , mercantile and commercial , that had the maximum development in the Middle Ages and has maintained unchanged over time his vocation. Here they had established major craft guilds of the city and even today there is a high commercial density. In the exposition you'll find photos of the famous Panificio Atti or Salumeria Simoni, some of the oldest and most famous food shops of Bologna, as well as Bologna traditional stores like Libreria Nanni or Zinelli.

The Jewish Ghetto in Bologna retains its original urban structure and is the hidden and mysterious city , where excellent workshops and new activities related to the design found their headquarters to combine tradition and innovation.

Osteria dell'Orsa, photo by Giulio di Meo
The exposition is open from the 1st November to 31 December at CARISBO (Palazzo del Podestà) in Piazza Maggiore but if you can't come you can see some of the photos at Repubblica.it
Photos courtesy of Giulio Di Meo, from Repubblica.it
You may also like